Generically, aegukga refers to any song that expresses love for one’s country. However, the term has become synonymous with Korea’s national anthem. During the period of enlightenment in the late Joseon Dynasty, several patriotic songs were used. In 1896, the first editions of the Dongnip Sinmun (The Independent) featured a number of lyrics for such songs but it is unclear as to what melodies were sung with those lyrics. According to records, a song entitled “Daehan Jeguk (Korean Empire) Aegukga” was composed in 1902, and the government organized a western-style military band to play it during major state functions. The lyrics of Korea’s national anthem were first written sometime around 1907 with the intention of inspiring love and allegiance to the country, as well as a sense of independence at a time when the country was under foreign aggression. Following adaptation by several composers, the lyrics gradually took the form we know today. Initially, the Aegukga was sung to the tune of the Scottish folk song, “Auld Lang Syne.” While studying abroad, Korean composer Ahn Eak-tai felt that this foreign melody was unfit for Korea’s national anthem. In 1935, he composed the Symphonic Fantasy Korea, the finale of which became the current melody for the national anthem. Even though the Provisional Government of the Republic of Korea adopted this tune as their national anthem, it was only known abroad. In Korea, the lyrics continued to be sung to the Scottish folk song until the Korean government was established in 1948 following the nation’s independence from Japan. At that time, the current version of Aegukga was sung during official government functions, and gradually, with its inclusion in all student textbooks, it gained popular acceptance. Afterwards, the song was widely disseminated abroad and finally became established as the national anthem of Korea. Whenever people sing Aegugka, which, for almost a century, has been part of the people’s destiny both in good times and bad, they are reminded of the love that their forefathers held for the nation. 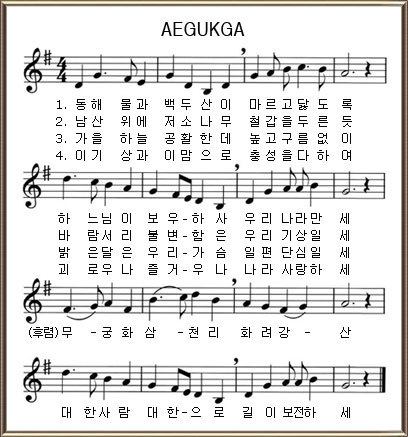