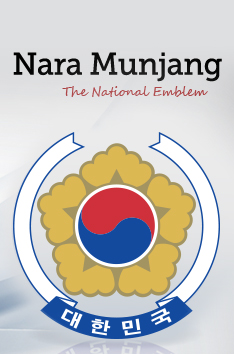 In general, emblems were adopted in western countries to symbolize the genealogical records and authority of a clan, organization, or the state. The national emblem of Korea is called Gukga Munjang or Gukjang. The design is based on the motifs of the Taegeukgi flag and the Mugunghwa flower, which are national symbols. The taegeuk motif is surrounded by five mugunghwa petals, and the entire design is encircled by a ribbon with the letters ‘대한민국 (Republic of Korea).’

Based on the Regulations on the National Emblem formulated on December 10, 1963, the national emblem is used as a state symbol on major documents sent to foreign institutions, on medals and other decorations, Presidential commendations, and signage on diplomatic missions abroad.
The emblem is designed in the form of a badge or a brass die. If necessary, the size can be scaled up or down depending on the usage.